I think I follow a pattern when it comes to ΠWEEKs, July’s edition is mostly for software and December’s edition is much more about hardware.

7th ΠWEEK was from 15th to 19th of December so, yep, it meant “physical stuff”. Angela and I have been attending DragonCon for 4 years in a row and we enjoy every part of it, the tens of thousands of people, the talks, the panels, the shows and the amazing costumes a lot of people bring to the Con.

TL;DR Go to the video at the bottom 🙂

For 2015 we want to get into serious Cosplay too and Angela was looking forward to building up one inspired by Commander (fem)Shepard from the acclaimed Mass Effect videogame series. So the idea for this ΠWEEK was to get into wearable electronics to build a sort of biotic arm that would reflect rather sophisticated light and sound effects built in a glove.

An example of biotic energy being displayed (not the pursued cosplay/character).

The challenge was to do everything from scratch. Never before I had been faced with textile electronics, so many leds and connections, autonomous power source and acrylic thermo-manipulation.

The components used were:

The result was a fully functional glove with three modes (not that different between them at plain sight for the ΠWEEK demo I must admit but that is easily fixable), sound working and accelerometer working. 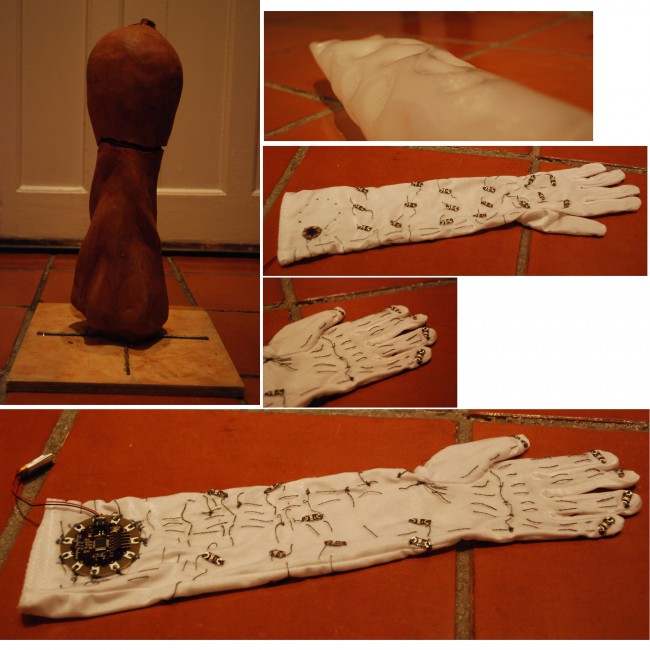 Not so good stuff

I spent half of this ΠWEEK looking for the materials (thanks Esther for that hint on CEPLASA plastics store!), using my mother’s oven, trying to overcome the limitations of space that a glove has, etc. It was the perfect R&D into wearable electronics, now I feel confident enough to actually design the real piece of equipment for next year’s DragonCon Mass Effect cosplay for Angela 😀

You can see here the glove without and with the acrylic housing. When Angela moves her arm up and down with a gentle stroke, you can see “mode 2” in action, it is a subtle (maybe too subtle :P) wave pattern.