Now that we’re approaching our Penpot public announcement, we realise our secret project wasn’t so secret.

Five years ago we released Taiga to the world and it became an instant fav for thousands of agile teams around the world. They could finally enjoy an inclusive cross-domain project management platform. It was open source, agile-focused and featured a superslick intuitive UI. But that announcement almost killed us, or rather, the lack of a proper one.

We got so much attention during the first 24h that we were featured at Yellow Combinator’s Hackernews and Producthunt. Top #1 for hours. Still today, you can travel back in time and sit with us for that entire first night at our offices, while our servers were being hit really hard. Our best estimates for user sign-ups for the whole year were smashed in minutes.

Fast forward to present day. Taiga is being used by an estimated 20M+ users worldwide. 500K use our SaaS service while the rest are distributed across an estimated 1.5M+ on premise deployments, with tens of thousands of installs per week. We are a couple of months away from releasing our second biggest product, Penpot. Some call it the open source figma-killer, I prefer to refer to it as the platform that will bring design freedom for teams. Over the past 12 months we have been working hard to make sure we would deliver a great release by the end of 2020. Despite COVID19, we are on track to actually exceed our planned feature roadmap by 30%. I admit I have never witnessed this before, to actually develop much faster and much better than expected by the team itself.

This time we decided to both keep a very low profile pre-launch and also carefully craft a comms strategy on launch and post-launch so that we would not be caught with a low guard. That’s why we disguised the project name (UXBOX instead of Penpot) and we only shared the news with very niche communities that could become early adopters. But… we still had the git repositories public because why not be transparent for the curious people out there?After all, there are millions of repos out there and nobody cares. Well, that might not be true for Penpot (even with the uxbox disguise) and so I have a challenge for your prophecy skills. Here we go.

Take a look at this chart that was sent to me by a VC fund interested in both Taiga and Penpot next to the text “you’re going to like this”. 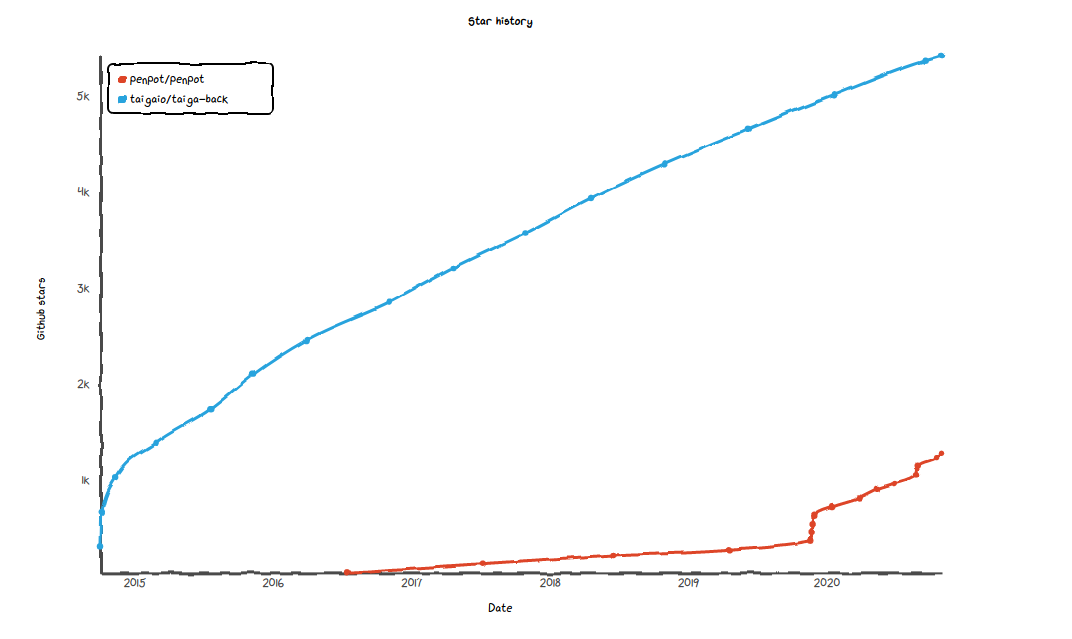 Even if this is unfair to Taiga since there are other Taiga repos missing, like Taiga-front, adding another 4K repo stars to the blue line, I want to draw your attention to a fascinating fact. Remember what I said about Taiga’s chaotic (good) announcement? It meant we went from a dozen github repo stars to over 1000 in just a few weeks, let’s call that T1. Now… look at penpot repo. What do you see? Exactly. penpot is not even released or announced and we are already past Taiga’s T1 mark, let’s call that P0. We’ve got that P0 > T1 and the gap is just getting wider.

Now, you might have noticed a strange Penpot spike by the end of last year. BTW, is there a Halloween trend or what 🎃? Actually, this is when we decided to go all in with Penpot and the github repo activity might have attracted some attention. What about FOSDEM private announcement in February 2020? Well… not so much. OpenUp Summit in September 2020? Yeah, likely!

Here is what is going to happen by the end of the year. At Taiga we are going to release Taiga6 and it’s going to be a game changer. Completely new UI, much better UX, greater third-party integrations and a completely revamped KANBAN board while the SCRUM module jumps to the next level. I’ve asked the team if I could share just one picture and they reluctantly accepted, so here you are. 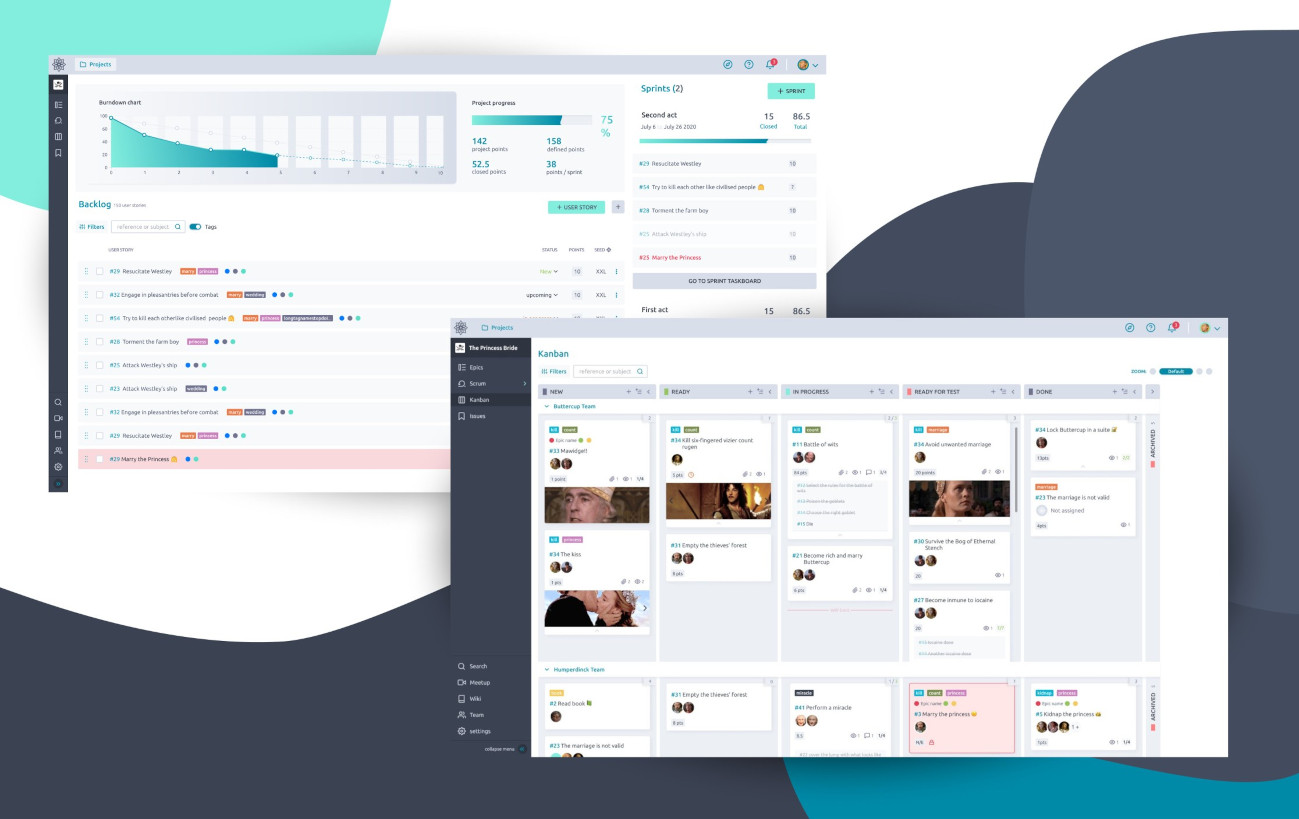 In terms of repo stars, I’m pretty sure we are going to see a big spike. I don’t know… a combined 2k? 3k? 4K? And we will appreciate the global community validation, for sure. You might be wondering, “OK, Taiga’s little brother, Penpot, is just going to say have a nice trip! to Taiga starship leaving orbit”. But… Penpot beta release is also going to happen roughly at the same time. And Penpot’s headstart is considerable. Oh, sorry, introducing Penpot (again, “just one screenshot, I promise” deal with the team). 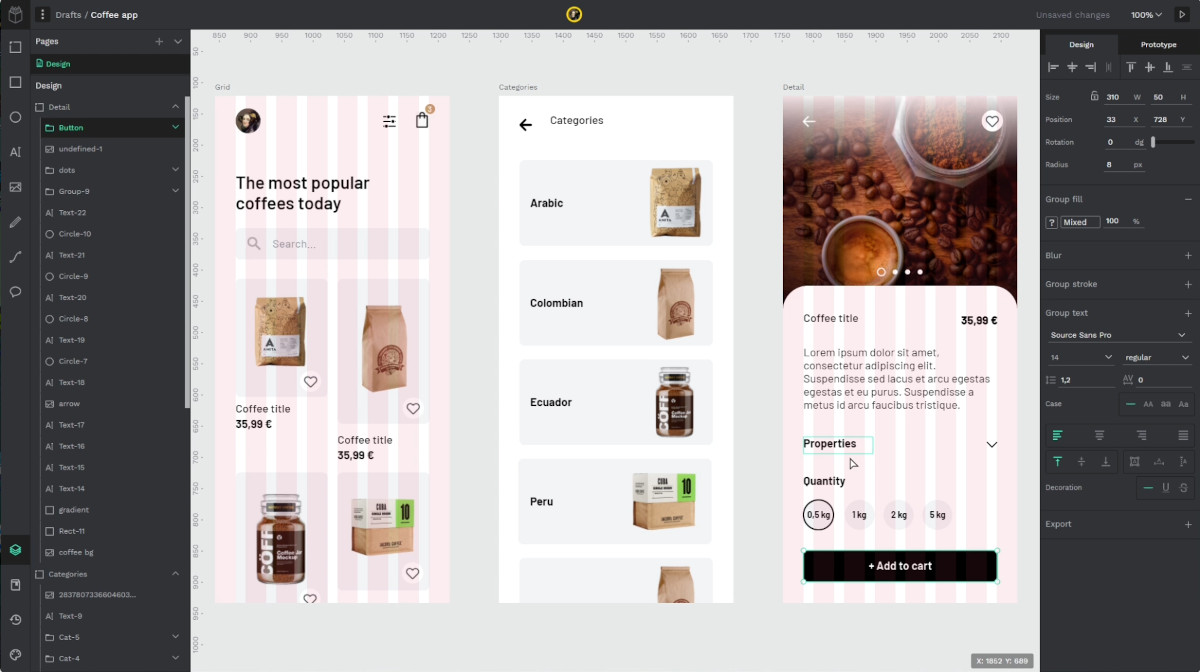 Penpot looks amazing, even if it’s suggesting I drink some coffee right now, not gonna happen :) I’m writing this piece at 4am because I couldn’t sleep, I’m not kidding. My two cats, Ada and Sorsha are staring at me like “Are you OK? and if so, shouldn’t we be partying hard?”.

When we released Taiga a few years ago, it was a unique proposition but there were quite a number of project management platforms, some decent open source ones too. But Penpot’s scenario is way different and I’m starting to consider that if despite having kept a very self-conscious low profile and focusing on product and vision, we are seeing these community metrics, perhaps, just perhaps, Taiga6 might not be that unreachable for Penpot. And before you ask… of course Taiga is going to help Penpot. Taiga is Penpot’s big sister, and she’s going to take good care of him! The point here is whether Penpot is going to need any help at all…

Many investors see github repo stars as a nice validation, whether technical or not, specially for serious open source projects. I agree, they are a nice “achievement”. I just hope it means we can build a diverse and respectful community on top of that, that is the metric I care about if we’re set up for making an impact.

My academic and professional background is in physics and computer science so I love to predict the future whenever I have enough data points. This is my bet. I think Taiga6, coming from a well-known platform, might grow 20% in repo stars in a couple of months. That’s a lot, it has never happened before except on T1. For Penpot, I’d say… P1 is going to be 400% P0, yeah, like 5K+ repo stars by the end of February 2021.

What do you think it’s going to happen? And why do think Penpot was noticed so soon?

PS: Oh, dear, what time is it? I think I’ll go and read a book or something. Yeah, a good candidate at this time of the night could be Arrowstorm, by Richard Wadge, where I’ll be able to learn how many shillings a year a horseback archer would had to pay to the King of England for food and ale while in the Hundred Years WarZZZZzzzzz

The best projects are the evergreen projects, the ones that keep you on your toes long after they’re launched and especially the ones that get developed by the best people.