At Kaleidos, we love organizing fun activities at work that are non-work related. That’s the space where we get to know each other, have a good time and unwind from the daily routine. It’s the space where the good vibes we have at Kaleidos are born.

How we organize fun activities at work

During the first months after I joined Kaleidos, I didn’t expect such a wide range of available activities. The thing is that it’s tricky to find one sort of entertainment that we all love. For that reason, I suppose that new initiatives have cropped up in order to meet individual preferences. Those initiatives have turned into clubs that we explain further below. 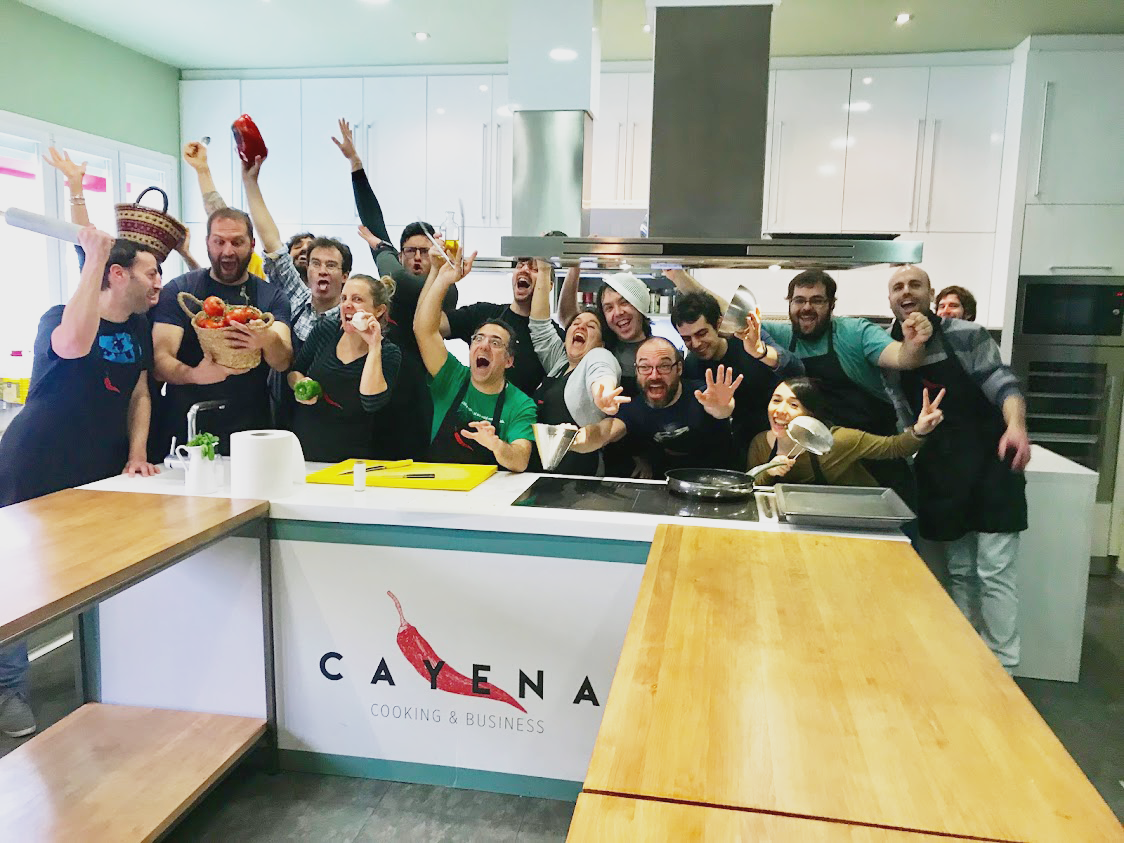 Kaleidos team in a cooking master class day in 2018

When the pandemic began, one of our first worries, as any other company, was the lack of interaction with other teams at Kaleidos, as well as informal chats not related to work specifically.

We’ve been working remotely since March 12th, 2020. It was already optional to stay home for a few weeks prior to March 12th for those who wished to do so but when lockdown started and working remotely became the norm for everybody at Kaleidos, we evolved all activities to an online format. Some of them didn’t seem to work and, though there was a general agreement to keep in touch, we seemed to struggle to meet online.

Therefore, we decided to create a committee to look into what wasn’t working or what was missing. We ran a poll among kaleiders and there were very diverse responses: from just timing issues or conference-calls overload to quite large groups and many people trying to speak simultaneously. With these output, we formed small clubs and we reviewed some others.

I’ll review the most popular ones and how we adapted them to the new circumstances, either changing or keeping the same format over time.

It must be the oldest of the clubs at Kaleidos. It was born in 2016. Every month we choose a book under 200 pages and we gather to review it a month later.

It was easier to keep it as it was because we just switched to conf-call mode. The only problem was to give up the tapas we used to have at the bar next to the office!

“CLECK has survived all this time throughout the pandemics thanks to our core team of regular cleckers.”, Alonso Torres, software engineer at Penpot.

If you’re curious about the books we’ve read so far, here’s the list of books.

This initiative came about during the lockdown as a way to interact with the others and to have a bit of a laugh.

At first, we played drawing games such as skribbl or Gartic. However, soon we realised that the top game that we couldn’t stop playing every week was Gartic Phone. There are several playing modes but our favorites are:

Like many other companies, we used to gather for breakfast in the kitchen on a daily basis to catch up on anything and everything: work, weekend plans, new restaurant discovery, etc. For some people that was a key place to get to know the rest of the team members, although for others it could be a bit overwhelming with so many simultaneous chats.

Kaleiders in a special Halloween edition of the Friday Huddle

When lockdown began, this routine was transformed into an online format. First weeks were pretty busy with a lot of participation, but as time went on, some people dropped to the point that some days one could end up alone in the online conference room. Video calls overload and unsuitable timings seemed to be the cause. For that reason, we decided to make this a regular appointment late on Fridays just before finishing off the week. This time used to be the time we’d go to the bar to chat and have some drinks. It seemed easier to make the effort once a week only instead of every day.

As I mentioned above, finding an alternative to our casual breakfast meetings in the kitchen brought up a few initiatives. For those who may get overwhelmed by online meetings with many people chatting simultaneously, we created quieter meetings in smaller groups.

How did we do it? With an open-source plugin via Mattermost created by Juanfran Alcántara, software engineer at Taiga. With this plugin, we can set up whoever wants to participate by sending a command through Mattermost chat to get signed up.

Every Monday, the plugin originates a new conversation with the participants for the week’s meeting. The participants are chosen randomly each week. And then they organise themselves to find a spot to have a chilled chat for half an hour. We make an extra effort to find the time because we love getting together!

For the random distribution of the participants, two variables are considered: how many times you’ve met with your colleagues and when was the last time you met with them. That way the random selection is kept as balanced as possible.

At the beginning, this initiative was planned for 1-to-1 catch-ups and it was working quite well but some participants felt it’d be more comfortable to meet with more than just one person. We ran a small poll internally to see whether it’d be better to do 3-4 people meetings. We gave it a try and it was much more successful. 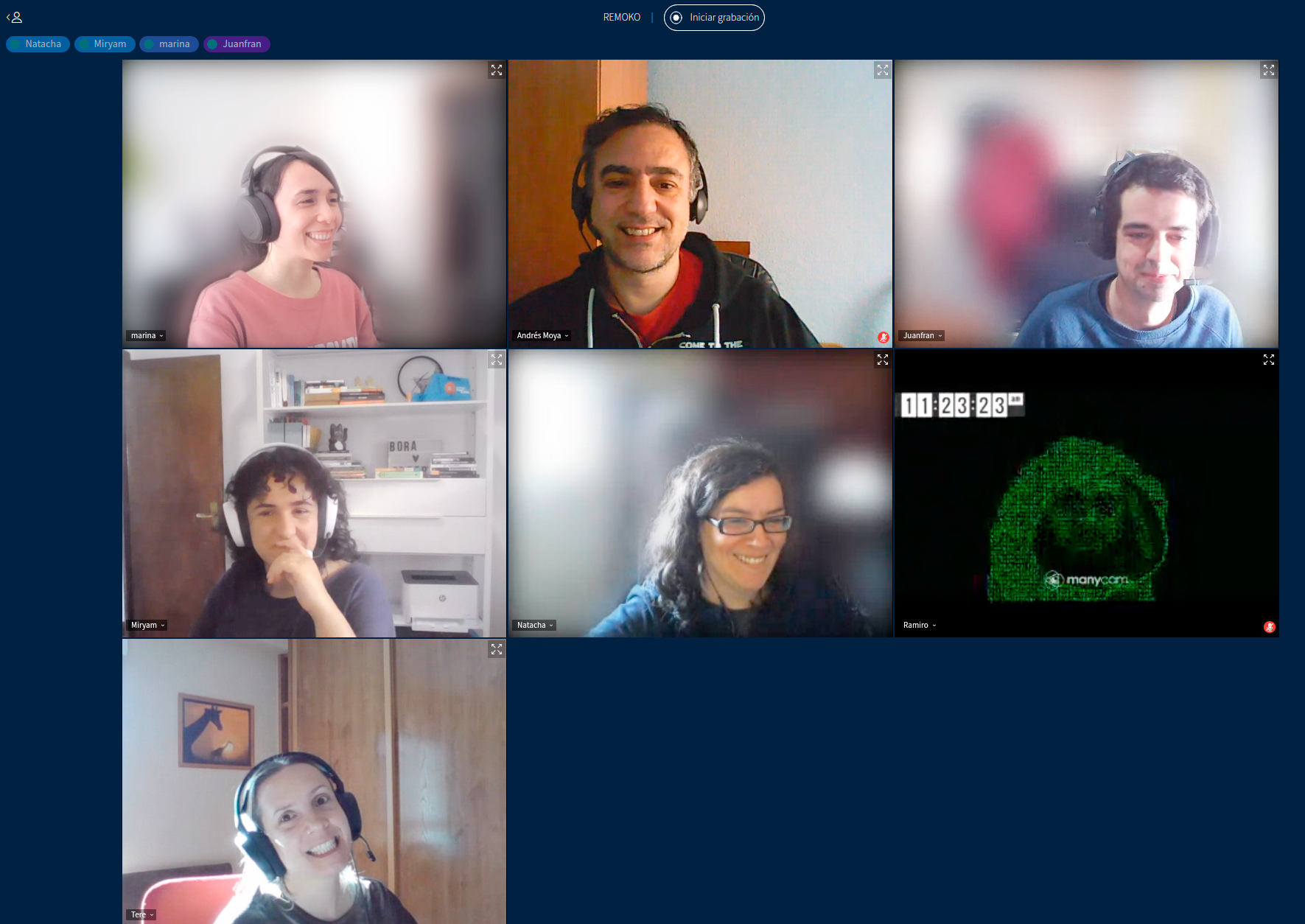 This one was created during the lockdown. For a long time, we’ve had a channel in our Mattermost chat server dedicated to movies and series—no spoilers permitted. Normally, we shared upcoming movie trailers and cried about how bad the adaptation of our favorite comic or book was! And we got to a point where the chat channel wasn’t enough, we wanted to talk further about some of them that had really caught our interest to the point to reviewed them with a score as if we were film critics!.

We began choosing a movie per month. However, with the overload of new movies on streaming platforms and cinemas as well as the avid movie watching addiction at Kaleidos, we’re testing a weekly meeting. We choose more mainstream movies for the weeklies and we leave the critically acclaimed one for the monthly meeting.

This weekly meeting was created towards the end of 2018, the design team felt they needed a space to learn, debate, catch up with other designers’ work at Kaleidos and talk about any subject related to design. Especially targeted to designers but not exclusively—everybody is welcomed.

“Since the pandemic began, we have more attendance, though we miss the in-person whiteboarding experience that we replace with online tools such as metroretro.”

This is another themed meeting that came out of another themed channel in Mattermost. Every first Monday of the month, we assemble at breakfast time to review the games we’ve tried during the past few weeks; what we have in mind to play next or ask for recommendations. We also review news from the game industry, watch a trailer or simply play together online.

And you wonder whether we get any work done, right? Yes, we do! First, it’s not that common that one kaleider will participate in all activities (~4 hours a week, perhaps) but even if it was the case, it’s time well spent. We organize internally with quite a diverse bunch of activities to make sure we get everyone covered with a little bit of fun on a regular basis. We believe that happy people work better. We like to be efficient and focused when working on a particular task but we also love having fun and getting together with our teammates—it’s part of our culture.

About pixel-art and VR games, sites to keep your recipes online or to keep track of your mead brews, an online whiteboard or how to access your medical data.