Last week, Kaleidos shipped an expedition composed by Juan de la Cruz, Ramiro Sánchez and Xavier Julian (me!) to attend a brand new conference in Manchester: UpFrontConf. The team grabbed their baggage to the too cold, too windy and too rainy northern city and prepared for the mission: do not miss a bit about some of the most interesting faces out there and bring back a full bundle of ideas to apply to our projects.

To be honest, in an European environment overcrowded of conferences with high-as-sky prices the details make the difference:

But, lets get straight to the point. The talks:

I should recognize that I was very interested in listening to Brad Frost. Although I already use most of Atomic Design principles in my projects (my own version) it is always interesting to listen to the details. Atomic design is an approach to development, based on HTML and CSS templating where the project building starts on atoms (minimal items) and grow in complexity (molecules) until it gets to the full layout. I’ve got some ideas on how to improve our future Taiga development and we also learned about Pattern Lab, an open source project to help develop atomic design that, unlike frameworks like bloated-styles-opinionated Bootstrap, gives you only a basic approach to organised development.

Testing it is still a unknown world for most of front-end developers out there and their code (not only javascript!) is rarely tested. It is also considered a commodity that companies cannot afford. Alicia made really interesting a complex talk about testing (when we didn’t get yet to the first coffee of the day, which is actually an achievement). The talk started by explaining why we should test our code (!important) and basic concepts as unit tests, integration tests, and visual regression tests. Then, Alicia showed an example of how to make every type of tests.

I specially liked the visual regression tests with PhantomCSS because it focuses also on UI. This is not the panacea for detecting broken blocks while building the layout, but could help.

Optimization is one of our greatest challenges in front-end development. Our images, CSS and resources needed for the experience we want to offer to our users requires a major revision on how are we doing our websites. Dean Hume made an interesting experiment, improve the event site performance. Well, the talk gave us a set of resources easily found online in a few clicks, but the interesting was to see the process made by Dean on how he improved the site performance almost live.

Web Typography you could be doing right now by Richard Rutter

I didn’t know what to expect about this talk. I am not a big fan of the insights of typography and don’t think this was the event for it. Well, I was wrong. This was an amazing talk about how to use typography orientated to our CSS code. Please, read it, enjoy it, and apply it. I already started to feel a big quality results. Richard explained basic and advanced concepts about responsive typography, line length, line-spacing, line-height, type size, type styles selection and variants. It was awesome and I feel really happy that I didn’t miss this talk.

Design Decisions Though The Lens Of Performance by Yesenia Pérez-Cruz

Well, this talk made me believe in a better world of designers and developer living together under the same roof understanding each others needs. Thanks, Yesenia. She started by explaining why she felt like a “reckless designer” living in a world where performance is not a designer problem. After a while, and mostly based in a agile approach, communication and understanding, she realized that might be his work to make the client understand that that may not need three carousels in the same page. Yesenia made clear that performance should be considered as well part of the design process. It should be negotiated with the developers and with the client. 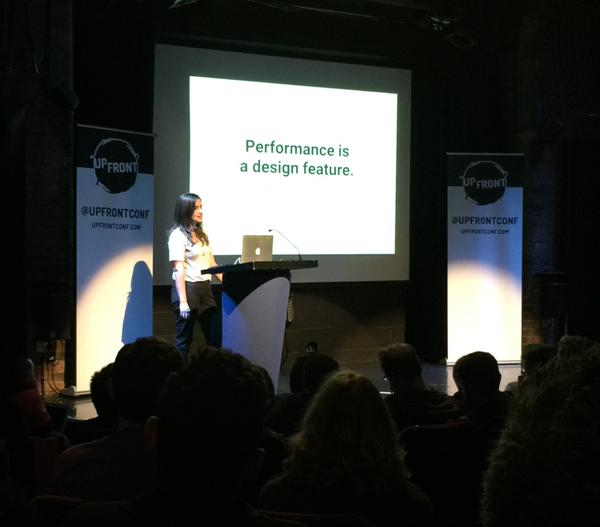 As a conclusion, I think Manchester has great potential for future conferences. Organization is awesome, the venue was great and the talks were amazing. As an improvement, I will raise a bit the level a bit, since it is a very focused front-end conference and will pray the Gods to stop the rain. More talks about performance and code quality would be a massive delight for everybody. Good talks mixing designers and developers (about UI and code) would be very appreciated as well.