I arrived on March 16th after almost missing my connection in Frankfurt (as there are no direct flights from Madrid I had my connection there). Although we landed in time I had only 50 minutes before the other flight departure. We stopped in front of the terminal more than 15 minutes after we could got off the plane. Besides that, I was seated in the row 33 of the plane so I was blocked until the whole plane got off. After that, I ran across the terminal but I finally catched the next flight to Gothenburg. For my returning flight to Madrid it was pretty easy. That time I arrived at gate A47 and my flight to Madrid was at gate A46 🙂

That same day at 18:00 we had the speakers dinner. These speakers dinners, part of most of the conferences, are a great place to talk with other speakers outside your comfort zone about many things. I started talking in a group of five and, with some beers, we introduced ourselves and also talked about the topics that we were to present the following days.

The following day, March 17th, the conference started. There were many interesting talks related to the Java ecosystem. The talks I liked the most were:

And about my session, everything was fine. There wasn’t many people in the room (I guess that Grails is not a trending topic in a Java conference) but I think the attendees enjoyed the talk, specially the demos. If you are interested, the slides and the code are availble at my Slideshare and Github account. 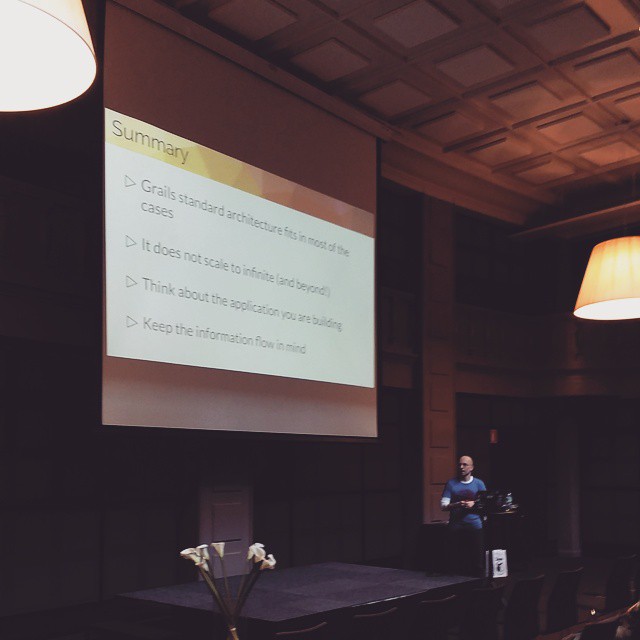 With this talk I have started what my Kaleidos mates have called #IvánOnTour2015. It turns out that I sent some proposals to many conferences around Europe and almost all of them have been accepted. So, for the next months I’ll be on tour speaking at: Greach, ConFess, Spring IO, GeeCON and GR8Conf.
and GR8Conf.

There is no need to introduce Codemotion, an event that happens in some cities in Europe where development communities meet in one space for a two day conference with different programming languages and tracks for every developer’s need and flavour. One of them takes place in Madrid where you will easily find most of the Kaleidos team. However, the main event was born and is still being hosted by the incredible city of Rome.

So, there I was, invited by the organization of the event: Codemotion Rome 2014.

This was my first FOSDEM and the first in which there was a track of design. I’ve been very lucky :). As an Open Source designer it represents one of the most important events of the year, not only because of the importance of the FOSDEM in our philosophy but also because of the opportunity to see me surrounded by designers with my own concerns. So let’s started!