This past week I went to Copenhagen for my third GR8Conf EU in a row (and the second one as a speaker) and I also stayed a couple more days sight-seeing the city. These were my favourite sessions:

Just before the Groovy Puzzlers talk we had the “Greet & Meet” and the traditional GR8Beers, which were great (pun intented!). 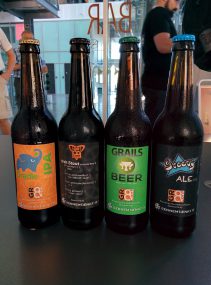 After the session I talked to a lot of people and I even played one round of the “The Captain Game”. It’s basically a drinking game in which you need to repeat some sentences and do moves with you hands and feet. If you fail, you need to finish your beer and start again the next round.

This time I did the following talks:

It’s always great going to another Groovy conference because I already knew most of the speakers and it’s easy to find someone to talk to. For example, I was talking to Danny and asking him a lot of questions about Ratpack because we’re going to use it for our new project. He was really kind and help me a lot so now I have a more clear picture of some Ratpack elements.

This conference has been the 7th stop of my #IvánOnTour2016 and now it’s time to take some rest. I think the next one will probably be Codemotion Madrid in November but don’t worry, in the mean time I’m pretty sure I’ll give a talk at Madrid-GUG and even at SpringMadridUG.